At Withings, we firmly believe that intelligent, connected devices are not the future, but the present. Still, it’s always good to take a look at the road ahead and see what the future may still hold. And what better looking glass to use than some classic sci-fi movies?


In Back To The Future Part II for example, Marty McFly gets to try some very nice self-lacing shoes, to go with his flying skateboard, his flying car, and his flying most-of-everything. A genial tinkerer named Blake Bevin is actually working on making such shoes a reality, although his invention isn’t quite as seamless as McFly’s pair of Nike yet. It’s coming at the perfect time, since Nike is releasing these days a special limited edition shoe identical to the one worn by Michael J. Fox in the film, although without the self-lacing function. 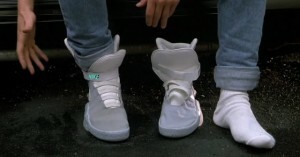 In Steven Spielberg’s Minority Report, most of everyday devices are intelligent and connected. Holographic computers interface with special gloves, cars drive automatically along roads that are both vertical and horizontal, biometrics has become ubiquitous (which will cause some problems for Tom Cruise’s character) and the whole house has become connected and intelligent. When chief John Anderton (Tom Cruise) comes home, light and soft music turn on on their own and he just needs to sit down to enjoy his family movies on holographic display.

Finally, the pinnacles of intelligent devices are, of course, robots. Robots are quite common in science-fiction, but few movies have as many of them as Alex Proyas’s I, Robot, inspired by the novels of Isaac Asimov. The robots shown in this film are not characters with a personality, like Star Wars droids for example. Instead, they are envisioned as the perfect, universal tool. Entirely autonomous, capable of complex deduction, problem solving, intercommunication and even some measure of critical thinking, they are the ultimate home appliance, the tool capable of operating all the other tools.

Flying cars and lightsabers might still be a long way away, but quite a few devices that had long been consigned to sci-fi movies are now making their way into the present. Which ones do you think will be next? Imagine if your scale could communicate with your fridge to give you cooking advice depending on your weight indicators and what you have available!