After visiting Health 2.0 at San Francisco and Berlin, Withings headed to San Diego for another event, TedMed, between October 25 and 27. The atmosphere was quite different from the other conferences: TedMed is an offspring of the Ted conferences dedicated to innovation in healthcare and does not center around an exposition hall, but rather around a series of speeches given by high-profile speakers. This year, TedMed attendees had a chance to hear the thoughts for example of Lance Armstrong, Regina Benjamin, Michael Graves and Steve Wozniak. 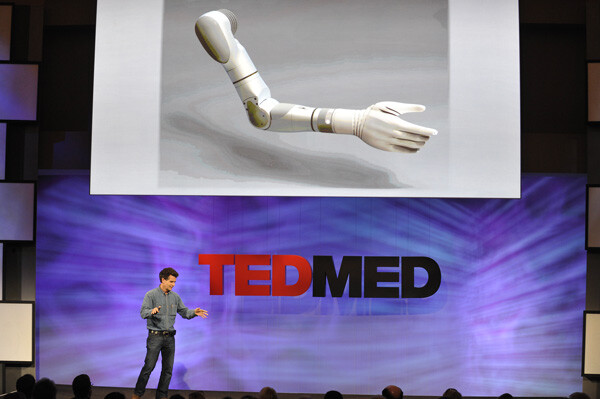 TedMed also featured an innovation showcase room, and that is where Withings was, between a machine that can read your thoughts and another that uses a pair of USB gloves to simulate rock-climbing in Second Life for the benefits of patients in rehabilitation. We were here to present the blood pressure monitor and we had the opportunity to make a few dozen demonstrations as well as explain the benefits of long-term self-tracking of blood pressure. We had also brought with us one of the first Smart Baby Monitors and it performed admirably, despite the lack of toddlers around.

We had a chance to catch a glance of the speeches. All of them were very interesting, most were truly inspiring but the one that left us the biggest impression was the demonstration on stage by Ekso bionics of an exoskeleton that allowed a paraplegic man to stand and walk alone, assisted by  just a couple of crutches.

The TedMed organization also made a lot of efforts to encourage attendees to socialize with each other, which allowed us more personally to meet and exchange with a lot of very nice and often fascinating people. May this post serve to thank them for this as well as for inviting us to demonstrate our devices under the sun of Coronado Island.