What country is the most active?

To motivate you for back-to-school, we have compiled a graph comparing weekday activity levels of Withings Pulse O2 users, between France, Germany, the United Kingdom and the United States. Which one is the most active country? Who gets out of bed first? Who leaves the office first? Read on to find out. 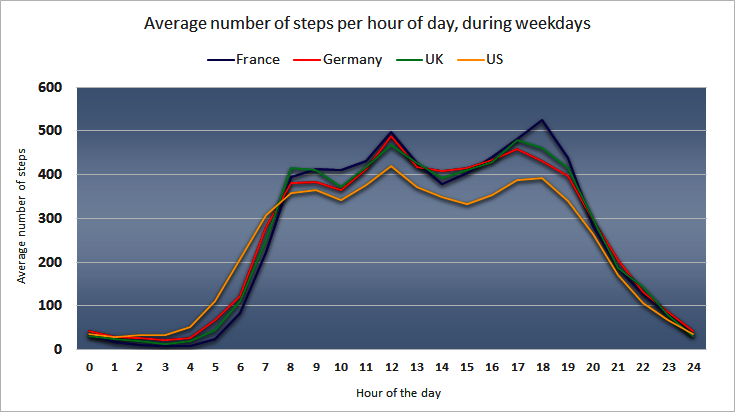 Crunching activity numbers we found out some pretty interesting things. Look at this chart: it shows how active Withings Pulse Ox users are on weekdays (on average)… Here are the results, country by country, and hour by hour! The time of the day is indicated by the horizontal axis, while the vertical axis represents the number of steps tracked. What can you tell?

People in the United States get up the earliest

At 5AM, the average number of steps taken by US residents wearing a Withings Pulse Ox is around 100. Of course some of the US Pulse Ox wearers are still sleeping, meaning some are walking even more than 100 steps at the wee hours of the morning. One hour later, at 6AM, the average reaches an impressive 200 steps! It could be that in the United States people like to run early in the morning, before going to work. But it could also mean that people go to work earlier in the US than in France, Germany or the United Kingdom. If you look at the chart around 6PM, you also notice that in the US the “late afternoon activity peak”  happens a little bit earlier. This could mean that they leave work earlier too…  Do you think it has to do with the time at which the sun rises in the US? If you one of them please share your insights.

People in the United States walk the least

Which country – between the US, the UK, France and Germany – is the most active country? Here’s a clue. When people walk an average of 6337 steps a day in Germany (based on Pulse Ox users), they almost take the same number of steps in France and in the United Kingdom (respectively 6330 and 6322). But in the United States that number drops to 5815! That’s around 8% less. It probably has to do with the prevalence of cars in the USA. What do you think?

In France, almost nobody gets out of bed before 6AM (based on users of the Withings Pulse Ox). They usually wait until 7AM to toast the baguette and get ready for work. On the other hand, French residents walk significantly more on the way home, once they leave the office. What do you think French people do? Where do they walk to? How come they walk more? Please share your insights with the community.

Between 7 and 8AM people take the same number of steps

Around 7:30AM users of all countries tend to have the same average number of steps per hour. Can you see at what other time of the day the activity levels of Pulse Ox users from France, the United States, Germany and the United Kingdom are similar? It’s at midnight! To conclude this little infographics we can say that although our days are segmented following the same schedule – wake up, go to work, have a break for lunch, work some more, go back home –  countries can have different habits in terms of activity levels, wake up time, and preferred time to be active. Please share this post with your friends worldwide! Don’t hesitate to comment below. For example, tell us… Do you live in the most active country of  the four listed? Are you rather active? How many steps a day do you take?

Are you wondering how active you should be?

Click here to know. And make sure you have a look at the Pulse Ox!