Impact of DST on sleep patterns in the UK

March 29 marked the beginning of Daylight Savings Time (DST) in the United Kingdom. At 1AM, we pushed the clocks forward one hour to 2AM, thus losing an hour of the day. Withings conducted a study to analyze the effect this spring forward has on people’s sleep patterns. 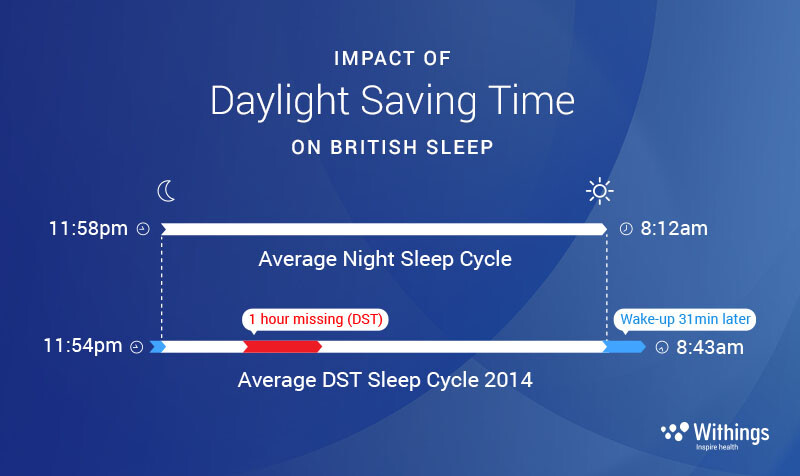 On the last Sunday in March, the clocks are pushed forward one hour at 1AM, to allow for more daylight in the evening, and less daylight in the mornings. This time change, referred to as British Summer Time, or Daylight Savings Time demonstrates interesting effects on people’s sleep patterns.
We might expect to see that people lose an hour of sleep, but our data reveals that this is not the case. People in the UK went to bed an average of four minutes earlier as compared to other Saturday nights, and woke up 31 minutes later as compared to other Sunday mornings. So even though there is an hour missing from the day, only 25 minutes of sleep are lost.
To better understand the effects of British Summer Time on sleep patterns, let’s take a look at the sleep and wake times in the weeks leading up to and following the time change.
In the days leading up to the time change, we see that people go to bed earlier than the national average for that given week day, and wake up earlier than the national average for that given weekday. Why are people getting up so much earlier in the weeks before BST? One explanation is that the switching of the clocks makes it lighter at night and darker in the mornings. Before this switch, there is more sun in the morning, making it brighter and easier to get up.
We also notice that in the days following the time change, people go to sleep later than the national average for that given weekday. We also notice that they are waking up a few minutes later than the national average for that weekday in the weeks after BST. Just as our bodies experience jetlag when flying to new time zones, it takes a few days for us to adjust to BST. Similar to the effects our body experiences after flying to a new time zone, the switch to Daylight Savings Time has jetlag like qualities. After two weeks, we observe that sleeping patterns return to a more normal level.
Take a look at the graph to get a more in depth look at the changes in sleeping patterns.