When mom gives a Withings activity tracker to her 7-year-old daughter, she gets revealing insights and a healthy call to action.

October 7th is International Walk to School Day, when kids around the globe are encouraged to hoof it to school instead of hopping on the school bus or being chauffeured door-to-door by mom or dad. In honor of this annual event to get kids moving, we talked to public affairs researcher Annabel Kelly, pictured below, founder and CEO of the opinion research firm AKK Research, who used a Withings Activité Pop watch to crunch the numbers on her daughter’s daily activity level – and got a surprising education in the process.

Kelly has a deep understanding of the health problems caused by the increasingly sedentary lives of children. In her work with the Alliance for a Healthier Generation, her focus is educating people about the health risks of inactive kids and offering tools for change. So when Kelly put a Withings Activité Pop watch on her then 7-year-old daughter, the discovery that her child was routinely falling short of recommended daily activity levels was an eye opener. And which days did she find were her daughter’s most active? The ones when she skipped the yellow bus and walked to school instead.
Read on to find out what inspired Kelly to track her daughter’s activity, the changes she’s made to increase her family’s daily exercise, and the new member of the family who is helping them achieve their goals.
***

Withings: Where are you in the world?

Kelly: My husband, two daughters – ages eight and six – and I live near the center of a commuter town in Connecticut. We don’t have much of a yard but, luckily for us, safe pedestrian routes have been a priority for our local planners. We can walk to school, the library, the train station, the park, the movie theatre, the YMCA, and the ice cream shop via sidewalks and crosswalks.

What made you decide to put the Withings watch on your daughter?

I’m a freelance researcher with a special focus on health and the family. Supporting (or dismissing) a claim with evidence is my thing. I’ve recently been working with the Alliance for a Healthier Generation to help raise awareness of the increasingly sedentary lifestyles our children are leading and the negative impact it is having on their health. I had to know if my own kids were getting enough physical activity. Putting fitness trackers on them was the obvious way to find out.

She’s an 8-year-old girl – she only wears what she wants to wear. She’s still wearing her Activité Pop four months on (and hasn’t lost it) so she must be pretty attached to it.

The first few days she was really motivated to reach the target number of steps. Four months on, she’s paying less attention to her steps but is still keen to walk every day. Unlocking the badges is fun. The Loch Ness (100km) badge – awarded because she’d done enough steps to circumnavigate the loch – was a real hit because she’s into mythical creatures. And, a bonus, because the Activité Pop presents her steps as a percentage of her daily goal she’s learned how percentages work.

What were the biggest surprises regarding her activity level?

How few steps she was getting during the school day. On the days she takes the school bus, her daily step average is only around 70% of her daily target of 12,000 steps.
Here’s a chart representing a day’s worth of activity that I downloaded (and annotated) from the Withings Health Mate dashboard: 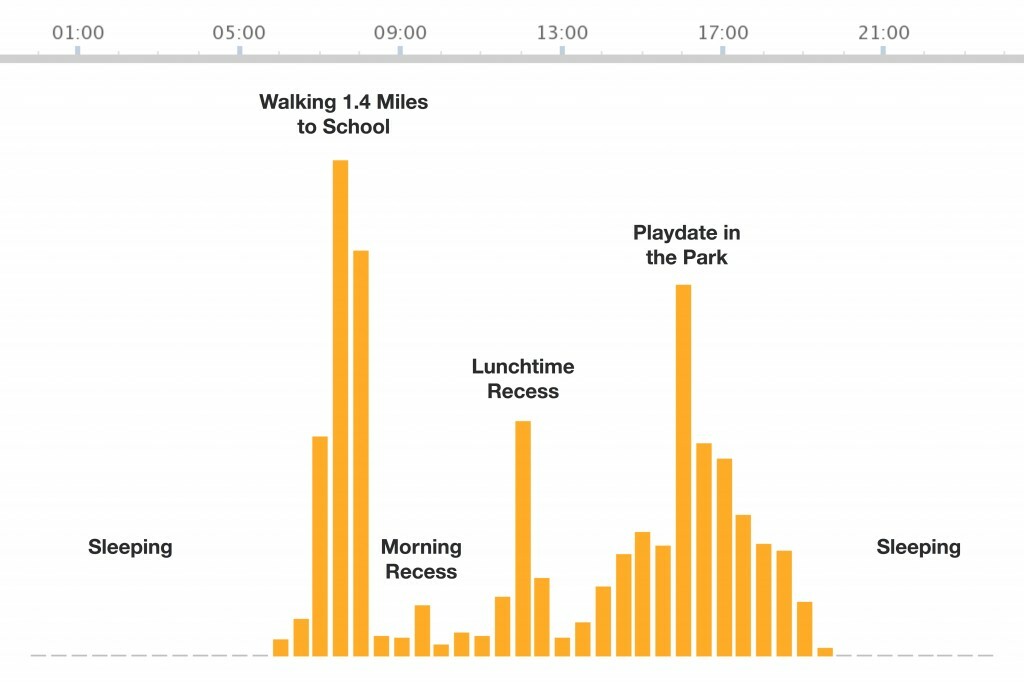 The results seen above were from a Friday in September, a beautiful fall day, when she almost reached her target. Aside from the couple of recess blips, most of her activity was achieved before and after school. This is typical. Once she starts losing outdoor recess because of bad weather, I’m worried that her activity level at school is going to flat line. She only has gym class two out of every six days at school.

What were your assumptions about your daughter’s activity level before tracking?

I assumed (wrongly) that kids need 10,000 steps a day to stay healthy, the same as adults. We really should have been aiming for 12,000 steps a day. I’ve just reset the goal on her watch to reflect the appropriate target.

Did you notice any changes in her behavior?

She’s definitely developed a love of walking, especially hiking. I’m not sure if this is because of the Activité Pop or because she enjoys being outside with our new dog so much. Probably a combination of the two.

What type of dog did you get and is your daughter still helping walk it?

We rescued a Chiweenie, a cross between a Chihuahua and Dachshund, at the end of July. A condition of bringing her home was that the whole family had to take her for a walk, every day, even in the rain, with no whining. So far, I’m not getting any resistance from my 8-year-old. My 6-year-old and husband need the occasional cheerleading.

Did you track your daughter’s sleep?

Yes, but I haven’t looked at the data over time yet. My daughter has a late night reading habit so I’m a little worried about what I’m going to find out.

What’s the game plan for keeping active in the winter months?

I’m determined for us to continue walking to school every morning. When the weather gets really bad, school is delayed or cancelled anyway. On snow days, the kids can help me shovel the driveway and they’re always up for sledding. Getting outside after school is especially difficult on winter evenings because it gets dark so early. We will definitely be making more use of the indoor facilities at our local YMCA. I will also sign them up for an after school dance or sports class.

Would you like to see activity trackers for kids that are developed specifically for children?

Yes! As my daughter’s Activité Pop is designed for an adult, it swamps her wrist. It would also be helpful for the clock face to be marked with digits as we’re still learning to tell the time. If Withings is planning to bring a child’s step tracker to market, we’d be delighted to road test it for you.

What more do you think can be done to encourage greater activity levels in our kids in general?

I think everyone – whether they are parents, teachers, caregivers, or policy makers – needs to be more mindful of our children’s activity levels. So much information is being collected on our children’s academic performance. I’d like to see that balanced with data that shows if they are getting enough movement in their day or not. After all, when it comes to achieving our full potential, we all need a healthy body.
Thanks so much to Annabel for answering our questions! For more on Kelly’s activity tracker-on-a-kid experiment see her blog post: Walk to School Days. You can also follow her on Twitter here: @AnnabelKKelly
Check out the Activité Pop tracker Annabel’s daughter is wearing to start tracking your activity — or your child’s activity — today.