Are Hoverboards Good Or Bad For Your Health?

Hoverboards have been touted as the hottest new trend in tech, transportation, and even fitness. They’re spotted everywhere from malls to city streets. But are they all they’re cracked up to be? Are these futuristic skateboards society’s solution to getting from Point A to Point B while whittling your six-pack abs, or just another way to avoid raising our heart rates? We talked to a man of science to get the scoop. Read on to find out if the hoverboard is a boon or bust for modern society.

It’s hard to even look at a hoverboard without conjuring up visions of the overweight, sedentary citizens in the Disney Pixar film Wall-E bobbing along, slugging back oversized sodas and staring at screens. There’s no doubt the fad was striking blow to the kid inside me who dreamed of a Back to the Future-style device. It’s a continual bummer to many of us Marty McFly fans that hoverboards… don’t actually hover.
You’ve seen the reports and accompanying apocalyptic videos of blazes originating in some boards’ lithium ion batteries. Add to that the threat combustion could happen in an airplane’s overhead luggage compartment, calling to mind terrifying 1970’s disaster films. Amazon announced they will offer people who bought hoverboards from them a full refund. WIRED reports that the Consumer Product Safety Commission is investigating some manufacturers and that they are working on safety standards, but that in the meantime, the CPSC wants all hoverboard retailers to “halt sales and allow consumers to return the gadgets for a refund.”
Still, some people find them cool. What’s not to love about the possibility of hopping on a self-balancing, rechargeable future-board and zipping past everyday luddites slogging along on foot?
But you might be asking, what are the risks versus the benefits of these speedy little electric scooters? To find out more, I talked to Andrew Maynard, of the blog 2020Science.org,  who’s also a professor in The School for the Future of Innovation in Society at Arizona State University. As Maynard is director of the Risk Innovation Lab, and has a YouTube channel about the science of risk called Risk Bites, I knew there was no better person to geek out with about the possible pros and cons of hoverboards.

Maynard cites possibility of fire as a health and safety concern. “Lithium ion batteries can be quite dangerous if not used correctly.” Overcharged and physically damaged batteries can overheat and burst, with dangerous results. “It’s not just hoverboards. The problem can occur in different devices from computers to airplanes. It’s a technology that works fine if everything works fine,” Maynard explains. “But there’s a lot of energy there if not used properly. A number of years ago some planes were grounded, because of their batteries catching fire. It’s what you don’t want happening in the air.”
But according to Maynard, the fire thing’s not a major issue, saying, “It’s something people need to be wary of. Don’t buy a knock-off hoverboard that might catch fire. Is there risk? Yes, but it’s not significant.”
So that’s one problem, but there may be a more subtle health threat around exercise deprivation. “When you hear ‘hoverboard,’” Maynard shares, “You can sort of imagine everyone flying around rather than using the legs they were given.”
Maynard considered health benefits and drawbacks with the gadget’s recent popularity. “One thing that grabbed my attention is that here on campus, you see more and more students riding around on hoverboards. As a scientist, he thought to himself, “why would you do this? Is it better or worse for you health-wise to go around on one of these things? How much exercise wouldn’t you have?” To his knowledge, nobody has scientifically studied this yet. There are websites that “talk about using core muscles,” he tells me, “but it’s anecdotal.” 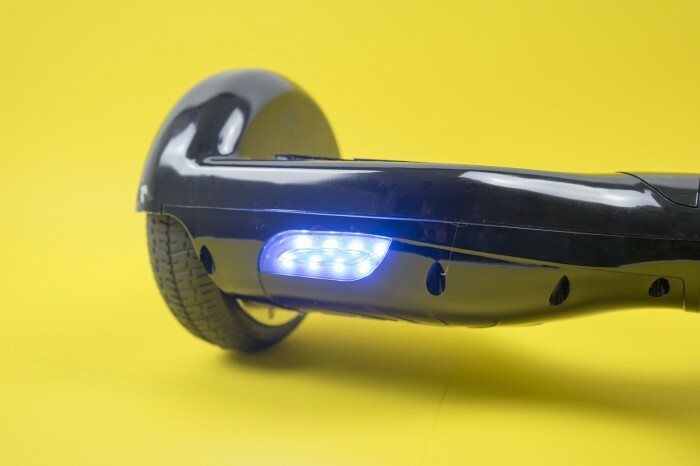 Can you hoverboard yourself fit?

I looked myself but couldn’t find any quantifiable data supporting hoverboards as fitness devices, either. Apart from people who make and sell the boards, there is scant evidence. There is a “hoverboard workout video” on YouTube claiming you can get “ripped abs in 5 minutes” but… it’s not serious. The best case for fitness was an article found in The Sun where one Jacob Lewis tried hoverboarding in London and claimed he was exhausted after 15 minutes and added that his calves “were burning like I’ve been in the gym” and said keeping his balance gave his abs “an unexpected workout.” It seems dubious, but I am a romance author, and he’s dishy, so we’ll file Lewis’ account in the non-scientific but compelling-because-he-has-rad-cheekbones column.
In a recent USA Today piece, Dr. Robert Glatter, an emergency physician at Lenox Hill Hospital in New York, was quoted as saying riding a board “successfully requires a person to balance, which requires a lot of core abdominal strength.”
That sounds good, but the article warned that those with a weak center were at high risk of injury. Dr. Glatter went on to say that if you have a weak core there is “an increased risk of falling forward or backward, which can cause elbow fractures, ankle injuries, wrist fractures and there is a risk for traumatic brain injury or concussion.”
Yikes.
In the end, perhaps it’s a case of the newness of the technology being way out in front of the research. But if hoverboards are calorie-burning machines or core-strengtheners, the proof remains to be seen. And so far, no certified instructors for hoverboard workouts have popped up at the local Crunch or Planet Fitness.
So, thumbs up or down to this super-fly skateboard?
Professor Maynard is clearly ambivalent. He says is would be nice “if there were a sharper edge here” and adds, “Everyone’s going all gooey-eyed about them, but I’m meh. It’s a new technology, bit of a fad, like it’s the best thing since sliced bread. It’s probably my age, but I prefer walking to one of these things.”
So, if you’re looking to stay fit, good old-fashioned walking wins over hoverboards. An average person weighing 150 pounds can burn 204 calories per hour walking a 24-minute mile (2.5 mph). And you can ramp that up to 340 calories per hour if walking a 15-minute mile (4 mph). Plus, walking is legal on all city streets, it’s proven to be very safe (your legs won’t catch fire, for sure) and it may keep the doctor (and bad cholesterol, high blood pressure and excess fat) at bay.
And as for that six-pack? No device is going to replace crunches. Didn’t we learn that lesson back in ‘80s with the Abdominizer?
Now drop and give me 20…
***
Image: Hoverboard photos via bestboyzde on Flickr