We asked our favorite magician, juggler, comedian, musician, inventor, actor, and best-selling author, Penn Jillette, for his take on Mother’s Day — and he delivered. Read on for what the holiday means to him, in his own words. 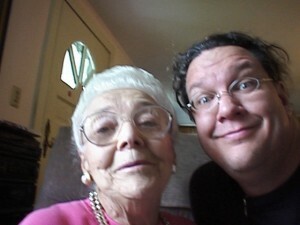 Yup, Mother’s Day is a phony jive-ass holiday. Total jive. The advertising for Mother’s Day is as bad as the cheeseburger ads that I tried to blame for my being fat. So what? I was always thankful for Mother’s Day because it gave me some focus. If not for that one jive day in May, I would have had to buy my mom flowers every day of the year.
I still think about my mom all the time. So many people in the comedy business almost brag about how “dysfunctional” their families were. Not me. I had and have a perfect family. They couldn’t have been better. Maybe that’s the reason I’m not funnier. Maybe that’s the only thing I can blame my family for.
I was very close to my dad and my sister, but I’ve never been closer to anyone than I was to my mom. We shared a heart. We understood things together that no one else understood. Will I ever feel that again? I don’t know. I have young children now, and maybe they’ll click in at some point, but I’ll still miss my mom every second. I talked to her every day that our lives overlapped, from before I could talk until after she was in a coma.

Withings invented the Wi-Fi smart scale and now has a variety of models to choose from. Find the one that’s right for you.
Discover

I always wear bright red nail polish (now it’s gel) on the ring finger of my left hand. When I’m asked why, I often say: “It means I killed a person for asking personal questions.” But the real reason is simple: it’s for my mom. When I was in high school I had been doing mostly juggling, but a little bit of magic too, for several years. My mom told me I should keep my nails clean, well-manicured, and not bitten, because I was asking people to look at my hands. In order to mock her, I grabbed her nail polish and painted my nail (I already had hair hanging past my shoulders and eye make-up, so the nail wasn’t a stretch). She rolled her eyes. I kept doing it as a way to show her she shouldn’t tell me what to do (it didn’t work).
That painted nail, which began as a way of mocking my mother, eventually became a secret code, and finally a tribute. When I would go on Letterman, if I brushed my thumb against my left ring finger my mom, watching at home, knew I was thinking of her on that joke. And when she died on the first day of 2000 (she made it for that first digit change), I knew the nail was going to stay. It’s not accurate to write that I wear my mom’s nail polish and my dad’s ring to remember them. That’s not the problem. The problem is trying not to think about them every second of every day. So, with those things focusing my memory, maybe I can get along in life. It’s like Mother’s Day.
I think my daughter, who is about to turn 11, started telling her friends that I wear the nail polish for her, my daughter, my little Mox. I think my mom would approve of all the little distortions that we use to make poetry out of our lives without her.
Yeah, it’s a jive-ass holiday, but think about your mom and buy her something. Maybe a Withings product, but at least something goddamn it.