A Race to the Finish: Marathon Training Weeks 15-16

Ever wondered what it’s like to train for a marathon? Our blogger, Rachel Glum, invites you along for the ride as she takes on her second marathon. This week, Rachel celebrates her return to running long distances after injury, and recaps her third half marathon, complete with her own personal race day tips. 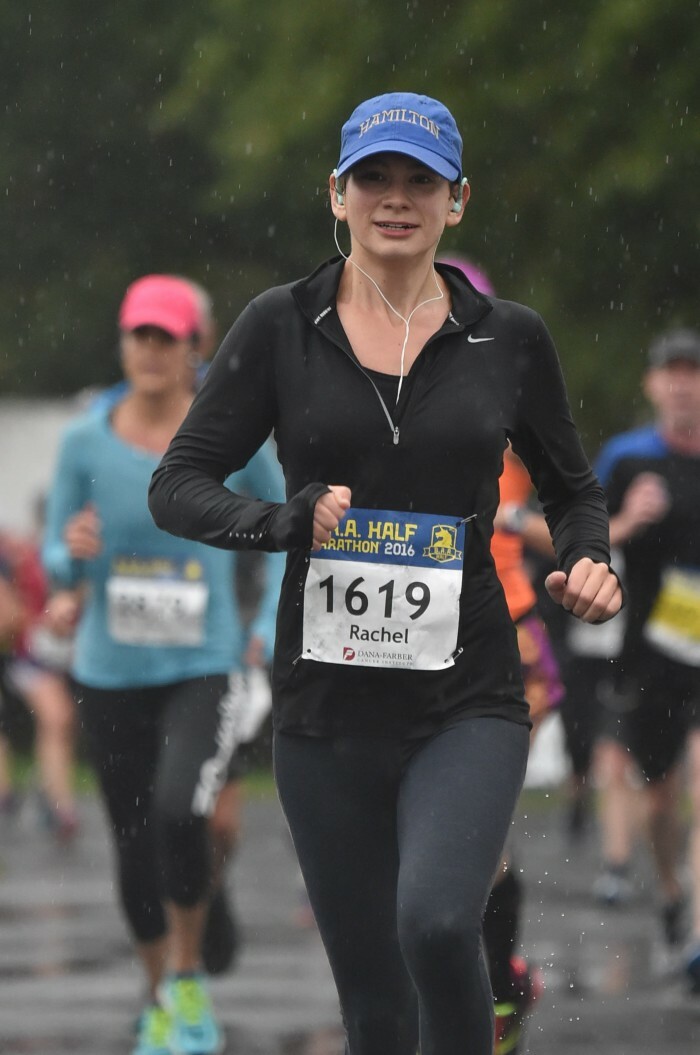 I can’t explain how good it feels to be back running long distances, mostly pain-free. My feet are still being a bit stubborn, but they are no longer holding me back from running. There’s nothing like running in the cool fall weather to remind you how amazing it is to move your body!
This past weekend, I ran my third Boston half marathon in a row. This is actually the only official half marathon course I’ve run, but it calls to me every year, since it’s the first longer-distance race I ever signed up for.
Having gotten in an awesome 15.5 mile run the weekend prior to the race, I felt very confident about being able to cover the 13.1 mile distance. However, I also wanted to set a PR (personal record), which meant I needed to run the race in less than 1 hour 55 minutes. While that would have been no problem before I had to take 4 weeks off due to injury, my pace has been significantly slower since then. I almost made the decision to simply run the race for fun, but I’m too competitive with myself not to attempt a PR.
Instead, I set a goal of trying to run at an 8:30/mile pace, which would have put me at a time of about 1 hour 52 minutes. This pace was definitely out of my comfort zone, but not impossible. While I experienced some discomfort — such as burning lungs and even mild nausea — I’m happy to report that I was able to run the race in 5 minutes less than last year, for a time of 1:50:49. It’s always amazing to see what my body is capable of.
Oh, and did I mention it was pouring rain too? Luckily, the rain didn’t bother me much during the race, but boy was I cold afterwards in my water-logged clothing. Shout out to Erin, my co-worker and fellow fitness lover, who also ran this race as her first half marathon. Even in the rain and with a foot injury of her own, she did amazing!
Having a successful half marathon under my belt makes me very excited for the next 6 weeks of training before marathon race day. While I know I won’t be able to run the race as fast as I’d hoped, I plan to focus on doing my best for every workout up until that point, and then evaluate a more realistic goal time.
For those of you still preparing for a half marathon (or other mid-distance race) this year, I thought I’d put together a few tips that you might not traditionally hear. While a lot of the conventional race-day tips (load up on carbs, stay hydrated, don’t do anything new) are helpful, there are some things that I’ve learned only through experience.

My Tips for Half Marathon Race Day

Almost every article you find will stress not to go out too fast at the beginning of the race. While this can be very good advice for first-time racers, or for those who will find the distance very challenging, I’ve actually found it to be misleading.
It was great advice for my first marathon. By mile 20, when my legs were starting to get seriously fatigued, I was glad that I had started the race out slow, or the fatigue would have kicked in even sooner. But for a half marathon, it leaves me feeling like I lost precious time in those first few miles by being too conservative with my pace.
If 13.1 miles is not going to bring your endurance to the breaking point, you may want to consider starting the race at or just slightly below your goal pace. If you’ve trained properly, your body should be able to handle this. By all means, do not sprint out the gate, or go significantly below your goal pace because adrenaline is coursing through your veins. But don’t waste time at the beginning running slowly simply out of fear that if you run faster, you’ll run out of steam at the end. Your body is almost always capable of more than you think.

I’m very lucky to have a significant other who is happy to accompany me to races. This makes my race day much less stressful, as I don’t have to worry about bringing too much with me or checking my gear. I can keep my phone, water bottle, extra layer, and anything else I might want right up until I’m about to line up for the race, when I hand them to him for safekeeping.
When we meet after the race, I have everything I need without having to wait in line. Perhaps this is more of a luxury than a realistic tip, but having friends there for support is really fun too!

Tip #3: Line Up in the Right Corral

I’ve lined up for too many races towards the back, in the 10 minute mile pace corral or slower. Some times, I was afraid to line up in faster pace corrals in case I couldn’t keep up, and at other times, I lined up too late to push further towards the faster pace groups in the front. Every single time, I’ve regretted that. In fact, a few times I’ve spent the entire race weaving in and out of people running slower than me, which doesn’t make for the most pleasant of race experiences.
While some races will assign you a corral ahead of time, if it’s up to you to line up, my best advice would be to start in the corral corresponding to your goal pace or just slightly faster. This really does make a difference in helping you achieve your best time in a crowded race.

When I’m trying to hit a goal time during a race, I find it helpful to pick my own personal “pacer.” I pick someone ahead of me who is running at the pace I’m aiming for, or slightly faster, and make it my goal to keep sight of them throughout the race. Of course, this plan isn’t foolproof, as you never know if the pacer you’ve picked will suddenly burn out or speed up, but it’s helpful to create some sort of competition as motivation.
Even if you don’t have a goal time, picking a “pacer” can help you push yourself more than you might otherwise. During this past half marathon, I was thanked by a man after the race for serving as his unofficial “pacer.” Little did he know that he also helped me push my pace as he ran alongside me. Friendly competition can be a huge advantage on race day.

Tip #5: Gain Time on the Downhills

For the life of me, I don’t understand why people speed up when going uphill, or slow down when going downhill, which goes completely against what your body wants to naturally do. To me, the key is to maintain as much of a consistent effort as possible, not pace, when scaling a hill. If the hill is shorter, I’ll try to maintain my race pace for as long as I can, but for a longer hill, I’ll immediately slow down to a more manageable pace. Regardless of the length of the hill, I always, without fail, speed up on the downhills. Don’t fight the momentum—Let it carry you down the hill faster, and focus on keeping proper form, with quick, controlled, yet light steps.
There you have it! I hope these tips help you on your next race day.