Despite being a successful business owner and YouTube star, Nicolas found himself overweight and unhealthy at age 43. Discover what motivated him to make a change, and how he managed to lose over 40 pounds. 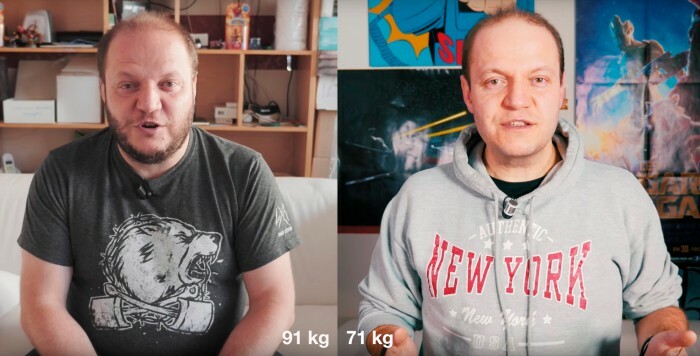 Nicolas Catard is now 44, married with 2 kids, and the owner of a small video production company based in Paris. He’s also a contributor to the successful YouTube channel, The Grand Test, specializing in pop culture and technology, a columnist on various blogs, and is regularly cited as one of the top 100 social media influencers in France.
But despite his success, Nicolas had struggled with his weight for a long time. By age 18, he was already overweight, and his weight only continued to increase throughout the next few decades. By age 43, he weighed over 200 pounds at just 5 foot 5. At this point, he realized just how much his health was in jeopardy, and decided it was time to get healthy. Read his story, in his own words, below.

When I was young, I developed a bad habit of eating a lot. Everybody would tell me to be careful, but I always told them not to worry. But the fact was that I really was eating too much, at all times of the day. Snacking was one of my biggest weaknesses, as was eating before bed. On top of that, I was also frequently invited to work events, where I ate a lot and was never strong enough to say I’d had enough. But I had gotten used to my bad habits.
In 2009, I became a public personality when, in pursuit of a job at a TV channel, I created a video in which I sang my CV. It was funny, and the video created quite a buzz. However, being seen by the public eye opened me up to criticism. People who didn’t know me started posting comments like, ”He’s fat,” or “Hey buddy, stop eating so much, you’re fat.” And when people you don’t know, who don’t know you, leave comments on the web, it’s really painful—more painful than when your family tells you.
In 2013, I co-started a YouTube Channel, and started publishing a video daily. And month after month, I realized I was getting fatter and fatter. No matter how much you try to just be the guy wearing the funny T-shirt, you can’t escape that you are fat. This is what the voice in my head was telling me.

Soon after, I was at my doctor’s office to get a health certificate that I needed for a Field Day event I was invited to. The doctor told me “I’m going to give you the certificate, but I’m warning you that you must address your weight ASAP. Your health is in danger. You are already obese and on the way to becoming even more overweight. You have to do something now.”
Some things were very obvious—when I was in the shower, I couldn’t see my feet. When I put jeans on, I couldn’t button them. And when I put my shoes on, I was out of breath. And most importantly, my kids were telling me, ”Daddy, I don’t want you to be ill.” I finally realized it was time to take my health into my own hands, so I acted quickly.

My wife, who was also overweight, and I decided to invest in a personal coach. I started running with him every week. I didn’t really find it too difficult, because this coach was great, and he started with me as If I were completely unaware of my body. He explained everything to me—how to eat better, how to exercise, how to relax after exercise, and really how to start from the beginning.
After a few weeks, I started to lose weight, but I needed something more, something that could serve as motivation and help me keep track of my progress. So I tried many smartwatches that had fitness tracking features, but I found that they all had the same issue, only one or two days of battery life.

A Tool for Success

Then I came across the Activité Pop. At first, I thought I didn’t want a product that wasn’t a smart watch and couldn’t show my email. But on second thought, I decided to give it a try, because this watch succeeded where all other smart watches had failed—it looks like a simple watch but delivers so much more.
As soon as I put it on my wrist and installed the Health Mate app, I realized this was the tool I had been looking for—one that is with you all the time, that has months of battery life on one charge, and looks like a watch. The step counter on the watch became my best friend, because I can see how I’m doing at a glance. There’s also no need to remove it when I shower or sleep, which is great!
The killer feature is the combination of discretion, long battery life, seeing your step count at a glance, and the Health Mate app that continues to improve. I also love that the Activité Pop can automatically detect whether I’m running or walking.
The Activité Pop really changed my life, because it is the perfect tool for me in my weight loss journey and helped me lose over 40 pounds. If in the future, there was ever a version of this device that could be embedded under my skin, I would sign up as the first tester! Although I’ve gained a few pounds back over the summer thanks to BBQs and beer, fall is here, so I’m recommitting to my health and fitness today.
***
Thanks to Nicholas for his story! Want more? Read about how Luke Adams changed his life.

Discover Steel HR, the activity-tracking watch that measures heart rate around the clock.—or treat yourself.
Discover